Riverside Place, a development of 13 Georgian inspired homes located at Norbury’s Yard off King Street in Knutsford, beat stiff competition from other new build schemes by local developers in the annual awards ceremony, which celebrates design excellence in residential and commercial development.

The award was handed to Hillcrest Homes by head judge Wayne Hemmingway, of Red or Dead fame, at a glittering ceremony held at The Royal Armouries in Leeds. 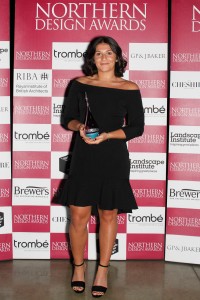 Collecting the award was Hillcrest’s Development Executive, Simone Milner, who said; “We’re over the moon to have won this award for Riverside Place. The development was the result of over a decade of hard work and close collaboration with architects, planners, local estate agents and English Heritage.

“We were delighted when all of the properties were sold off plan. Now to receive critical acclaim for our design response to this unique site is just fantastic,” she added.

The development was designed in close collaboration with Altrincham based architects Calderpeel.

Hillcrest’s ‘Residenza’ development was also named as a finalist in the category for ‘Best Architectural Design Concept’.