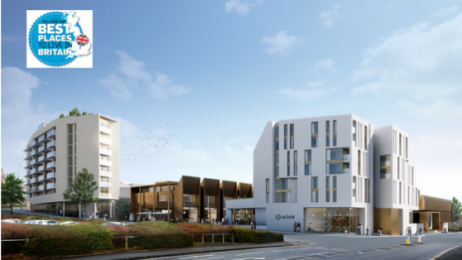 Four of the locations cherry-picked by Hillcrest Homes for forthcoming developments have been named in the prestigious ‘Best Places to Live 2018’ list compiled by The Sunday Times.

Altrincham, home to Hillcrest’s Altair development, was named as regional winner for the North West. It’s a stylish modern market town in South Manchester and was described as “jumping” by The Sunday Times with the fabulous Market at the heart of a £6m regeneration plan which has succeeded in making “this slice of suburbia ‘cool'”.

Also on the list was The Ribble Valley, the location for The Warren, Hillcrest’s first development outside of it’s Cheshire and Greater Manchester heartland.  Described as a place for “Gorgeousness and Gastromony”, this prime and picturesque location was praised for its sweeping views out to Pendle Hill and the Forest of Bowland and its fabulous range of gastro pubs, markets, food producers and wine merchants.

‘The Heatons’ – a collection of four suburbs on the outskirts of Stockport – was on the list for the first time and usurped desirable Didsbury. Described as “classic and classy suburbia” with good schools, good transport links, up market shops and bars and “a steady suburban vibe”, Heaton Mersey is the chosen location for a brand new Hillcrest development coming soon. Watch this space!

Ramsbottom – the nearest town to Hillcrest’s development ‘The Island’ – was also named in the coveted list for the first time. Described as The Sunday Times’ “Favourite Lancashire hot (s)pot”, with good schools, great countryside and engaging “eccentric” community spirit, it’s the “discerning commuters” choice and is also a great destinations for gourmets who love to dine and ‘shop local’.

Says Hillcrest Land Director, Stewart Chance; “Hillcrest Homes is always monitoring market trends and consumer demand to identify the towns and villages people really want to live in. The Sunday Times ‘Best Places to Live’ list is one of the most keenly anticipated property lists of the year. With four locations for forthcoming Hillcrest developments named in the list and another two locations of recent Hillcrest developments – Knutsford and Chorlton – also named, its proof that our research and market intelligence is absolutely on the mark.”

Read The Sunday Times’ listings for Altrincham,  The Ribble Valley,  The Heatons and Ramsbottom in full.